WhatsApp: the scam of the expired account returns, new chain from May 24 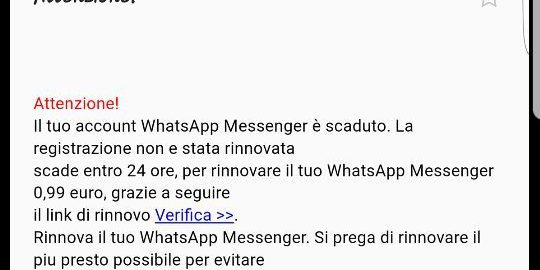 Just a few days after the WhatsApp color novelty-scam, the world’s most popular messaging app is once again being targeted via yet another scam. To make it known the State Police via its official Facebook page. Nothing new, this is the so-called expired account scam that resumes circulating with a new link (see photo) and is ready to hit the less experienced users. Let’s see how it works.

In most cases, these scams spread in the form of a chain letter, instead concealing phishing and/or infection attempts. In this case, the message that goes around is a warning about the expiration of the account and the related 24-hour deadline to prevent the application from becoming unusable. The message then informs that in order to avoid the deactivation of the account is sufficient to spend € 0.99 to be paid on an account available at a strange link. The whole thing bears the signature of WhatApp’s “commercial services” at the bottom.

It has long been known that the instant messaging service is completely free and will be so indefinitely, and the one described above is nothing more than a phishing attempt or installation of malware inside the device that can give rise to rather serious inconveniences such as charges and data theft. Receiving the message-link does not mean that you have been infected, you can simply ignore it and delete it from your device as an extra precaution.

Scam attempts are therefore the order of the day, which is why we will never stop recommending antivirus protection for your mobile devices, specifically smartphones and tablets.