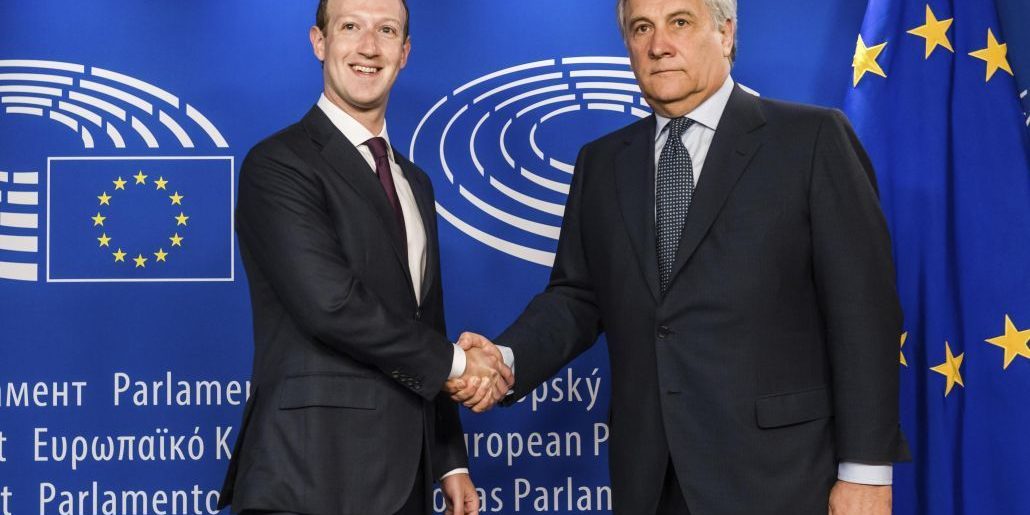 We return after some time to talk about the Facebook case and some news about it. It is now well established that the scandal that has hit the Californian company concerns the whole world, not just America, so it is easy to understand the reasons that have prompted the European Union to request a hearing from the company’s CEO Mark Zuckerberg. He had to answer some questions and issues that the MEPs wanted to put to him. Therefore, on 22 May, from 6.15 p.m. to 7.30 p.m., the hearing in question was held via live streaming, where Zuckerberg met the representatives of the eight political groups in the Parliament.

Antonio Trajani, President of the European Parliament, expressed his concern about the upcoming European elections in a year’s time, highlighting the need for a framework of rules for the digital market to protect personal data and copyright. Zuckerberg then responded by assuring that he had doubled the number of people working in the security sector of his company. “In addition,” Zuckerberg continued, “with the new European Regulation, people will have more control over their personal information. We have not had a broad enough view of our responsibilities, but we are now improving the security of our platform.”

Despite reassurances from Facebook’s No 1, MEPs asked for further confirmation of compliance from the company, in order to ensure that a case similar to Cambridge Analytica (see previous articles) does not occur again in the future. The CEO of Facebook elegantly replied: ‘We will never be perfect in ensuring security, but we are making great progress in this regard. There will be a lot of important elections in Europe this year and next year, from Slovenia to Sweden to Poland, and of course the European elections: it’s a priority for us to prevent anyone from interfering like Russia did in the US elections. The company is working on removing spam that serves economic purposes, fake accounts and dealing with people who post false information unintentionally, and we are working with external fact-checkers [people who look at the veracity of facts and information, ndr]] in this regard. Facebook is gearing up to comply with the European Privacy Regulation from the date it comes into force, which is 25 May.”.

As Zuckerberg himself states, there will probably never be absolute certainty that our digital data is safe, especially when uploaded to online platforms such as social networks. Adaptations such as the GDPR are undoubtedly important and necessary steps to ensure that data are treated appropriately in order to avoid situations, probably borderline, such as the Cambridge Analytica case, to date the biggest data breach ever seen.