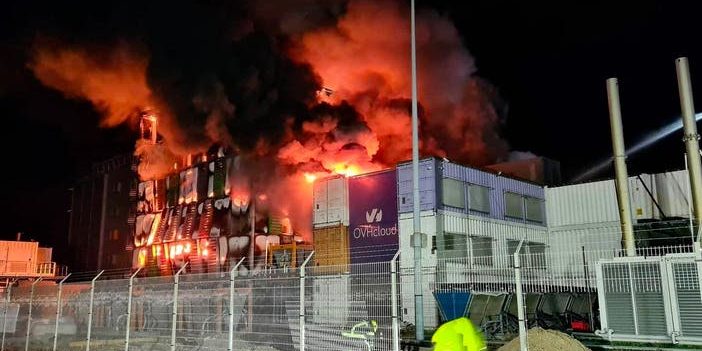 The news is out today: a serious fire broke out last night at the Strasbourg campus of OVH, the computer server company, destroying one of Europe’s largest data centres.

The company was founded in 1999, is headquartered in Roubaix, France, but has data centres throughout Europe. The name OVH is an acronym for On Vous Héberge (“We Host You”).
The company owns 17 data centres with a total of 250,000 servers and offers its services in 17 countries including Italy.

The flames broke out in the SBG2 data centre (which was completely destroyed) for reasons that are still unknown, but also affected the other units, especially SBG1, part of which appears to have been destroyed. SBG3 and SBG4 do not seem to be affected at the moment, however, power has been cut to the whole area so even those who had a site or service within SBG3/4 still cannot access their data.
OVH has already activated a recovery plan, and is trying to determine in the next few hours whether it will be possible to reactivate at least the equipment in the two buildings that were not affected by the flames in the next few days.

Damage from the fire

The confirmation of the incident comes directly from the social profiles of the company’s top management. There are reports of flames in the building, which were impossible to control for several hours.
The fire department was quickly on the scene but it took four hours to bring the fire under control.
The toll is no casualties, but several slowdowns or connection problems for customers.

“We had a serious accident on SBG2. Fire broke out in the building. The fire department immediately responded to the scene, but could not control the fire. The entire site was isolated, impacting all services in SGB1-4. We recommend to activate your Disaster Recovery Plan.”

The data centre is one of the largest in Europe and several Italian portals rely on OVH for their sites. This morning, in fact, hundreds of domains were down or severely slowed down by the power outage decided by the company after the accident.
On social media, especially Twitter, several users who rely on OVH have written about problems with their domains.

It is therefore a fact that with OVH currently at a standstill there could be tens of thousands of web pages that are not directly reachable!

In the meantime, the company has issued an official press release which states:

“With our 15 data centres in Europe, our technical and commercial teams are fully dedicated to supporting our customers, implementing solutions and mitigating the impact of the unavailability of our Strasbourg site. Our mission is to provide our customers with the highest quality of services to support their online activities and we know how important this is to them. We sincerely apologise for the difficulties and challenges caused by this fire”.

However, the real question in this whole affair remains one: is there no backup for data saved in the cloud? In the case of OVH, the data ‘in the cloud’ was simply on a server in Strasbourg, and many relied on the backup service provided by OVH itself, which is currently unusable for many.